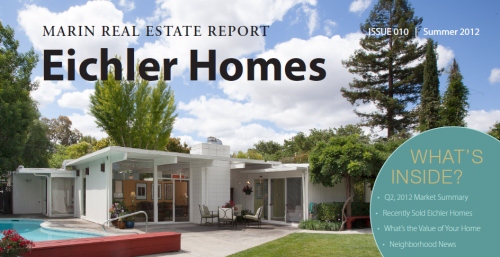 With the first 6 months of 2012 behind us, I wanted to provide fellow Marin Eichler homeowners & prospective Eichler Home Buyers with a mid-year update on the market for Eichler homes in Marin County.

A total of 27 Eichler homes were sold in Marin between January 1 and June 30, 2012.   Taking a closer look at Eichler sales for the first half of the year, the majority (24) of sales occurred in San Rafael where Eichlers took an average of 78 days to sell at an average sale price of $728,279 (97% of the original list price).  Importantly though, this average sale price was skewed almost $50,000 downward because of one home in the Terra Linda South neighborhood which was listed and sold for just $400,000.  This was the lowest sale price for an atrium model Eichler home I've seen since tracking Eichler sales throughout Marin County.   The highest price paid for an Eichler home in San Rafael was $1,195,000.

Contact me directly at 1-415-EICHLER (1-415-342-4537) if I can assist you with your real estate needs.   If you are an Eichler Homeowner in Marin County, you can also request a free, no-obligation of your homes current market value by visting www.EichlerValue.com.