Looking for an inexpensive way to enjoy a family day?  Take the kids to a community pool!  Keep them busy for hours and tire them out while you bask in the Marin sun and read a book.  Here is a list of local community pools by city that offer public swim hours for non-members at a reasonable fee.  And if community pools or club memberships aren't your thing, you can call me and I will help you find a home for sale with a pool!

How to House A Teenager

What?  You don't have a teenager?  Well, the first thing to keep in mind when considering a house for your teenager is that your cute little gurgling baby will BE a teenager in the blink of an eye, so if you don’t plan ahead you’ll be selling and buying a new house in seven to ten years.If you already have a teenager, you know what you wish you had if you don’t have it.And if you’ve got the right kind of house for your teenager(s), you are probably all much happier for it!

Buying a house with some extra room that you currently don’t see yourself using can pay off big time in the future, sparing you the upset... 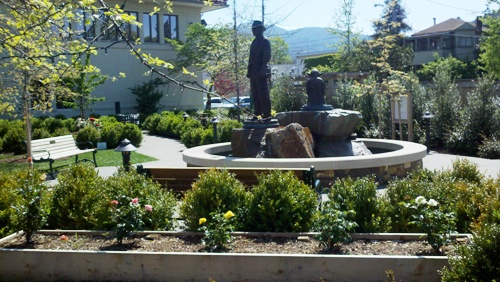 A pocket park, a small green lawn, plenty of inviting benches, and a shimmering fountain with statues of Yoda and Harrison Ford grace the space next to the San Anselmo Town Hall. Opened on June 20, 2013, on land donated by George Lucas, this petite parcel is a focal point for the Downtown area and a magnet for kids of all ages. Directly across the street from Marin Coffee Roasters, the Park attracts shoppers, strollers, sun-seekers, coffee drinkers, dog walkers, Moms, Dads, Kids, residents, visitors, nannies with baby strollers, and a multitude of others. Beckoning passers-by for a look, a sit, conversation, contemplation, a meetup, a play date, a stop at an impromptu lemonade stand raising money for a school project, it is an attractive addition to the extremely...

Well it is that time of year again, the time when we, as parents, sit down with our calendars and start to plan out the summer.  My first summer of having a child at "camp age" I completely missed the boat and by the time I got around to it most of the Southern Marin Camps were booked!  So the next year I learned my lesson and by the end of March my 8 year old was enrolled in all the camps that I thought he would enjoy.

We are so fortunate here in Marin to have such a diverse selection of camps.  What I have learned is that most private schools have a version of day camps on their campuses.  These camps are other organizations, but it is a way for you to meet families from those schools because they go to the camps.  As an example Marin Primary host a Camp Doodles, MCDS hosts Adventure Camp, Marin Horizons host a day camp with swimming, Greenwood School hosts Greenplay and many more.

The two largest  camps in our area are Steve and Kates and Camp Doodles.  My son has...

Things to do on a Rainy Day with Kids in Marin

As a parent in Marin County, I often find myself trying to figure out what to do with my kids on a rainy or really hot day. It can be quite difficult to find things to do indoors so I have decided to give a little guidance to other parents who have the same question! Below are some of my favorite things.........

San Rafael Gymnastics on Saturdays from 9:30 to 10:30 you can pay $10 per child to run, jump, balance, swing, climb, dance, and many more things that only a child could think of doing. I just started bringing my kids there on Saturdays and I could not believe that I had not done this before. It is nirvana for both children and parents alike.

Cal-Star Gymnastics is another place you can bring your kids up to Novato on both Saturdays and Sundays from 9:00 am to 10:30 for free play.