2015 was comprised of two different stories. From 2013 to 2014, there were huge run-ups as the market regained the lost values of 2006-2012.
This past year, the first half was punctuated with rapid sales, high multiple offers, and fast moving, hard-to-find inventory. The second half told a different story: The U.S. stock market had a correction over the summer, interest rates finally began their slow climb towards 5% later in the year and China’s economy had an inevitable course correction (demand for goods and services are increasing from China’s growing consumer-based middle class while their production is dropping off).
All of these factors led to fewer Bay Area Buyers during the second half of 2015. And thus, fewer multiple offers – particularly on the Peninsula and in the City.
Marin, however, with its extremely low inventory and abundant protected open space, only had a small hiccup in the Fall season. Well presented homes continued to see multiple offers.
2016: Expect to see a healthy spring selling season with fewer large price run-ups than last spring. But, demand is strong with Bio Marin continuing to expand into San Rafael and rumors that Google (aka Alphabet) is headed to the old Fireman’s Fund building in North Novato. (My sources say that Google Execs are already purchasing Marin homes.) With the addition of SMART train service (with a stop adjacent to the proposed Google building), Marin’s local economy may be driving some of our home sales in 2016.
Inventory remains at an all time low. Rents are at an all time high. Our aging population is either aging in place or renting out their high priced homes, thus keeping them out of the market. We have a 1.4 months supply of inventory which is down 18% from this time last year (a neutral market has roughly 3 to 4 months supply).
The other big story in Marin: two million to three million dollar homes are now the new higher end “normal,” making up 21% of all sales in the Ross Valley over the past two years.
Spring Selling? Between low competition, increased local jobs, and Buyers savvy that interest rates are only headed up later this year, it’s a great time to sell.
Call or text me for a no obligation home assessment. 415-302-4123. 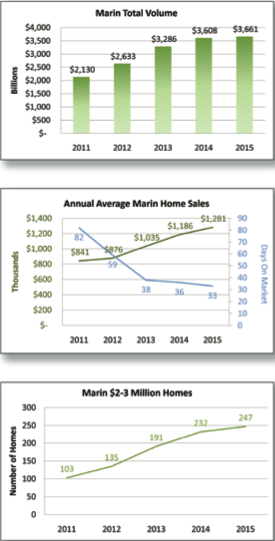