An Italian Villa's Garden & Modernism - Presentation at the Tiburon-Belvedere Library this week!

And now for something completely different . . . An Italian villa's garden! 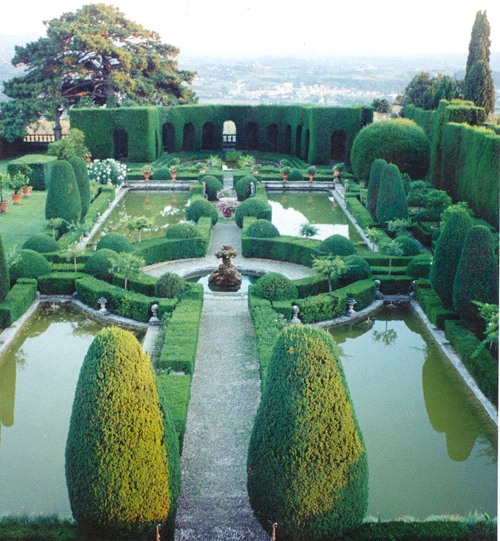 You may be asking why I would suddenly depart from mid-century modernism to talk about a garden that was started in the 1400s. Well, mid century modernism never would have happened without gardens like this one. Here are three reasons why I am dicussing this garden.

First, I am going to be giving a slideshow presentation about the garden at Villa Gamberaia (outside of Florence, Italy) on Thursday, October 7th at 7:30pm. It will be held at the Tiburon-Belvedere Library on Tiburon Boulevard, and you are invited. The second reason is to let you in on a little secret about the garden - and gardening in general. More on that later. And third, garden design throughout history is a continuum, and styles do not just spontaneously appear but are rather evolutions of all that has come before the current time and style. In other words, what we call mid-century modernism was born out of a rejection of ornamentation - like what you see above - and has surprising similarities and parallels to French formalism from the seventeenth century, another link in the chain of evolving garden design styles.

When I first started to study landscape architecture, we weren't even allowed into our first design course until we had completed History of Landscape Design I and II. Why, I wondered, couldn't we just get on with it? Who cared what has come before: we were all interested in the present and had an eye on the future. I find this hopelessly naive and arrogant now. In fact, I loved both classes, and have never really stopped studying landscape design history since, eagerly chewing up any culture or time that I didn't know about.

Here is what makes a great designer: someone who knows their history, has a clear understanding of the current ideas, and can design something that is both of the current time and timeless. That word timeless - when describing any work of design or art - is one of the hardest to achieve. When I finally hear someone say that about one of my designs, I can lay down my pencil and mouse, and die. 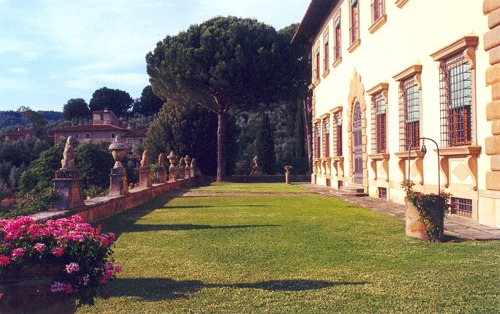 So, let's go back to Villa Gamberaia and take a closer look. In the photo above, you will see the front of the villa, now with a lawn. As most landscapes do, this one starts with a great piece of architecture. The nobleman Zanobi Lapi built (er ... had built for him) this masterpiece of Tuscan architecture, with a commanding view of the Arno valley, where the city of Florence lay. It was everything he needed, mainly a secondary home high in the hills above Florence, where he and his family could retreat. So much more important than just being a home, was his use of it to signify that he was very wealthy, successful, and powerful. It was quite the power statement, letting all know that he was ready for business. And in my mind, this was the purpose of this home; it was advertising: "I am the person you want to do business with; I am the person whose family you want to marry into; and I am the person who has influence over your government and church."

But here's one of the secrets: gardens can live forever, but people don't.  Here's another secret: gardens are living forms of design; houses aren't. What's my point? When you step into this garden and see it's breathtaking beauty, you may think - like I did - "Wow. Look at this amazing 400 year old garden." And that's the secret: what you are looking at is not even close to what has been there for over 400 years. Things have changed since Zanobi lived there, dramatically. Just one point: when the house was built, the lawn you see in front was a gravel driveway, where carriages dropped off visitors. And the cute little well on the right - that wasn't decoration, that was a real, operating well, since a place like this was a showpiece and a self-sustaining farm, with hundreds of acres devoted to food production for the family and staff, with a cash producing crop of olive trees. 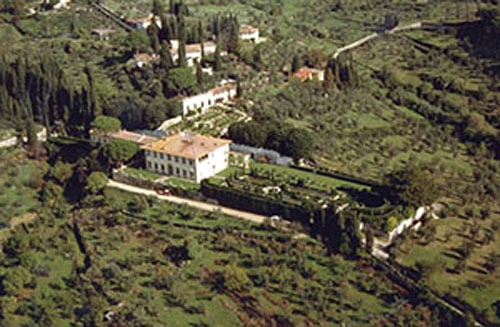 Here it is, surrounded by acre after acre of olive orchards, with a collection of dependencies for the staff necessary to keep this place running and profitable. A moneypit - as we know them today - this was not.
Here's another secret: over the 400 years since the villa was built, there have been several different owners. Each of these owners was of a different time and there were different styles popular during their time that they incorporated into the gardens. When you and I look at it today, we are really looking at five distinct layers of history. Today, no one would even think of changing the garden as it is; in truth, the garden has been dramatically redesigned several times. This doesn't even take into account that gardens are built with plants as well as hardscapes. And while most of the hardscapes are hanging on, most of the plants are relative newcomers. Plants don't live forever. 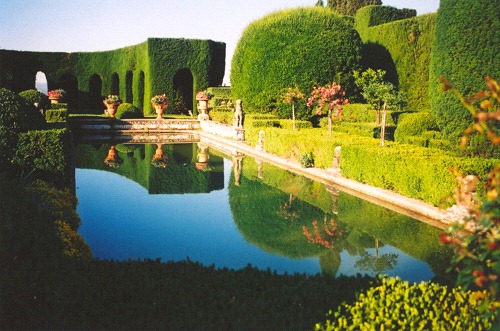 This photo is from the area of the garden called the parterre, which is a French word for division, as in a garden divided into sections. At one time, these ponds were beds of colored gravel with "embroidered" curls of clipped boxwood, as you would see in France's Versailles, and countless other European noble gardens. At a later time, these parterre de broderie were "transformed" into reflecting pools by a mysterious Romanian Princess who lived here in exile, with her American, lesbian lover. The pools were surrounded by a flowering riot of roses, annuals and perennials. In more recent times, after the Nazis occupied and subsequently tried to burn the house down, a German-American couple tried to restore the house and "tamed" the garden by creating a topiary masterpiece. Each layer contributes to the beauty of these gardens as they are today. 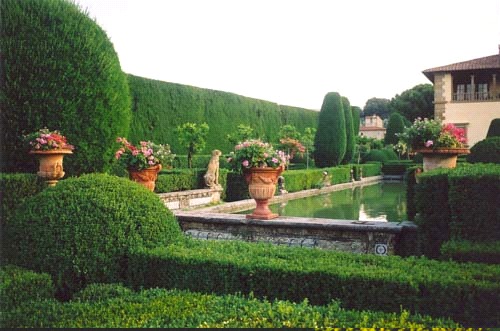 The latest "layer" of sculpting overgrown boxwoods took place in the 1950's, which is precicely when mid-century modernism was taking hold in the world.  And it was exactly this kind of garden that actually created the Modern design movement. Modernism was a rejection of all things elaborate. It was a rejection of all societies based on class and priveledge. Modernism was born out of change. The times had changed, the houses had changed, and the people had changed. And the landscape changed with it.

If you'd like to learn more about the garden at Villa Gamberaia, I'd encourage you to attend my lecture this Thursday, October 7, 2010 at 7:30pm at the Tiburon-Belvedere Library (map below).

I hope to see you there!