If your attached to the 415 area code and thinking about changing your number - do it before February 2015 because the 415 is coming to an end! Looks like the 415 will soon max out and a new era will begin - SF and Marin get ready for 628! 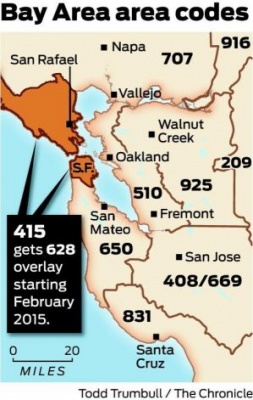 Never understood what the big deal was when area codes were changed and added like in Sex and the City when Carrie gets a new number, but I've ALWAYS been a 917 girl."  Now I get it. I have been "A 415 girl" my whole life. I have had the same landline phone number since I moved to SF in the late 80's and have been able to hold onto my original cell number as well.

In the big scheme of things It's a small change and for most a non-issue. Seems like the majority of the new numbers will go to teenagers and people relocating to the area that never knew and become attached to the 415!